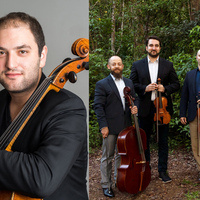 The award-winning Amernet Quartet, FIU's Artist in Residence Ensemble, will be joined by acclaimed cellist Julian Schwarz for a thoughtful and provocative program of Beethoven masterpieces.

Born in Seattle into a musical family, Schwarz made his orchestral debut at the age of 11 playing Camille Saint-Saens’ Concerto No. 1 with the Seattle Symphony and his father, Gerard Schwarz, on the podium. Since then, he has appeared with numerous other orchestras in the U.S. and abroad as soloist, and at the Casals Festival in Puerto Rico and in Palm Springs as recitalist. In August 2012, he recorded the Samuel Jones Cello Concerto, which was written for him, with the newly formed All-Star Orchestra, founded by Gerard Schwarz. Other recordings include “In Memoriam” for the Music of Remembrance series and the Saint-Saens No. 1 and Haydn C Major Cello concertos with the Seattle Symphony.

An avid chamber musician, Julian Schwarz has performed at the Aspen, Interlochen, Eastern, California Summer and Encore music festivals, and has been the “Featured Young Artist” at both the Seattle Chamber Music Festival and the Cape Cod Music Festival.

Influence from his father aside, Julian has always had a particularly musical relationship with Judaism. His first public performance was of Bruch’s Kol Nidrei at age nine, which he did as part of the High Holy Days services for his family’s Seattle synagogue—and continued to do so for eleven years in succession. He is also particularly fond of the Jewish works of Ernest Bloch, which he recorded for the Milken Archive.