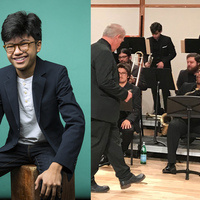 The 16-year-old pianist and three-time GRAMMY® nominee is enjoying one of the most ascendant careers in Jazz as a composer, musician, and bandleader. As he embarks on an exciting career which includes some high-profile U.S. performances and the release of new music, he performs with the FIU Jazz Big Band for what will be an unforgettable evening.

Josiah Alexander Sila, better known as Joey Alexander, is an Indonesian jazz pianist who has already wowed audiences and critics with his version of some Monk classics on two, Grammy®-nominated albums, My Favorite Things (2015) and Countdown (2016). In 2014, Wynton Marsalis invited him to play at Jazz at Lincoln Center, which, according to The New York Times, made him an "overnight sensation." Joey played at the Montreal and Newport Jazz Festivals in 2015 and has performed for Herbie Hancock, Bill Clinton, Wendy Kiess, and Barack Obama.

With his third studio effort Eclipse, his most personal statement to date, Joey takes another giant step forward, demonstrating his aptitude as a composer, bandleader, and musician, hinting at the many artistic paths open to him in the decades ahead.

The FIU Studio Jazz Big Band is one of the most visible artistic groups at FIU. With major performances annually both as a featured group and with world-renowned guest artists, the band has been internationally recognized as one of the premier college jazz ensembles in the world. Invitations to the International Association for Jazz Education Convention, the Mid-West Band & Orchestra Clinic, the Wigan Jazz Festival, the North Sea Jazz Festival, the Quito Jazz Festival, and the Maceo Jazz Festival have taken this world-class group of graduate and undergraduate students beyond the realm of the ‘typical’ college band. Recent local performances include opening night of the inaugural Miami Nice Jazz Festival at the Olympia Theater at the Gusman Theater for the Performing Arts, The Gold Coast Jazz Society concert series at the Amaturo Theater at the Broward Center for the Performing Arts, Larry Rosen’s Jazz Roots concert series at the Knight Concert Hall at the Adrienne Arsht Center for the Performing Arts, and the South Motors Jazz Series in the Banyan Bowl at Pinecrest Gardens.

A number of the featured soloists are past and present scholarship recipients from Downbeat, the National Foundation for Advancement in the Arts, the Gold Coast Jazz Society, and the International Trumpet Guild.