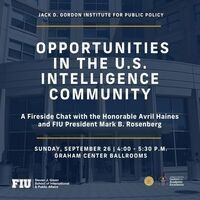 A Fireside Chat with DNI Avril Haines on Opportunities in the U.S. Intelligence Community

The Intelligence Community Centers for Academic Excellence (IC CAE) Program, in partnership with FIU's Jack D. Gordon Institute for Public Policy, invite you to Opportunities in the U.S. Intelligence Community, a virtual fireside chat with The Honorable Avril Haines, Director of National Intelligence, and Mark B. Rosenberg, President of Florida International University.

DNI Haines will address the mission of the United States Intelligence Community as it faces complex national security challenges in the 21st Century.

About The Honorable Avril Haines

Avril Haines was sworn in as the Director of National Intelligence on January 21, 2021. She is the seventh Senate-confirmed DNI in our nation’s history and the first woman to lead the U.S. Intelligence Community.

Director Haines has deep national security experience. During the Obama administration, she served as Assistant to the President and Principal Deputy National Security Advisor from 2015-2017, during which time she led the National Security Council’s Deputies Committee. From 2013-2015, Haines was the Deputy Director of the Central Intelligence Agency. She was the first woman to hold both of these positions. She initially joined the federal government as a civil servant and over the last two decades has worked in all three branches of government, in and outside of the intelligence community, and in academia as a research scholar at Columbia University and a senior fellow at the Johns Hopkins University Applied Physics Laboratory.

Haines most recently led the Transition’s National Security and Foreign Policy Team and served as a member of the National Commission on Military, National, and Public Service.

Haines received her bachelor’s degree in physics from the University of Chicago and a law degree from Georgetown University Law Center.

The fireside chat will be at the Graham Center Ballrooms at Florida International University. Seating is limited and will be on a first-come, first-served basis. There may be enhanced security measures at the door including but not limited to asking guests to provide identification at check-in.

Those unable to attend in person will be able to stream the event via webcast.fiu.edu.

Co-Sponsored by the Dorothea Green Lecture Series and the Ruth K. and Shepard Distinguished Lecture Series at the Steven J. Green School of International & Public Affairs