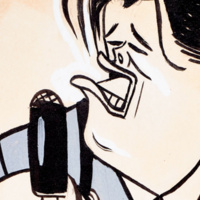 Caricature combines portraiture with satirical wit and style. In conjunction with Cuban Caricature and Culture, our installation about Conrado Walter Massaguer—one of the leading practitioners of the form in Latin America—this display from our library collection presents works of his contemporaries from Mexico and his native Cuba, where caricature was especially vital in the early and mid-20th century, promoting celebrity culture and contributing to political critique. The caricatures on display include such revered and reviled world leaders as President Eisenhower, Queen Elizabeth II, Fulgencio Batista, Fidel Castro, Benito Mussolini, and Adolf Hitler; celebrities like George Bernard Shaw, Sarah Bernhardt, Enrico Caruso, Diego Rivera, and Charlie Chaplin; and portraits and self-portraits of famous caricaturists like Miguel Covarrubias and Xavier Cugat.