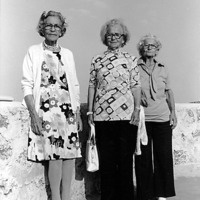 Exhibition: South Beach, 1977-1986 1977, Gary Monroe embarked on a decade-long project to photograph the aging Jewish community in South Beach. He had grown up around this community and sought to capture the vibrancy and slow decline of this close-knit neighborhood.

Influenced by photographers such as Garry Winogrand and Henri Cartier-Bresson, Monroe traversed South Beach capturing candid moments, daily activities, religious services, and community gatherings. Many of the Jewish residents during this time had retired from factory jobs in the Northeast. Some had survived the Holocaust and had immigrated to the U.S. from Europe decades earlier. They came to South Beach where, even on a modest retirement income, one could enjoy an active Jewish cultural and religious life as well as Miami’s warm sunshine, therapeutic ocean, and welcoming beaches.

Monroe received his MFA from the University of Colorado at Boulder in 1977 and began photographing his hometown as part of his thesis project. He strove to record cultural transformations as the Jewish population began to dwindle as a result of age, as well as external forces such as crime and real estate development. By the end of this project, Monroe had created an historical record of a changing community and unique era in South Beach.

The Patricia & Phillip Frost Art Museum organized this exhibition to complement FIU’s Common Reading Program and First Year Experience course. This year, FIU’s entering class and other new students read Determined: A Memoir by Martin Baranek. In his memoir, Baranek recounts his life as a young boy in Poland and his terrifying experience spent in Nazi concentration camps during World War II. Like many survivors, Baranek immigrated to Canada, initially settling in a Yiddish-speaking community in Toronto and working in a garment factory. Like so many of those who Monroe captured in his descriptive photography, Baranek built a new life for himself as a European refugee. Baranek now splits his time between Toronto and Miami.