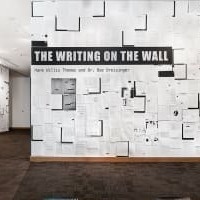 Artweek2018: The Writing on the Wall Hank Willis Thomas and Dr. Baz Dreisinger

A collaborative installation, The Writing on the Wall: Hank Willis Thomas and Dr. Baz Dreisinger  presents essays, poems, letters, stories, diagrams, and notes written by individuals in prison around the world, from the United States and Australia to Brazil, Norway and Uganda. During her years teaching in US and international prisons, Professor Dreisinger actively collected the hand-written and typed pieces.

The Writing on the Wall calls attention to the prison crisis in the United States as well as the Western modern prison system, which has spread across the globe. Just as mass incarceration is a growing global phenomenon, The Writing on the Wall constantly evolves and shifts focus based on the material written by those living behind bars in prisons around the world.

This exhibition is a part of the For Freedoms initiative founded by artists Hank Willis Thomas and Eric Gottesman. For Freedoms is a platform for civic engagement, discourse, and direct action for artists in the United States. Inspired by artist Norman Rockwell’s paintings of Franklin D. Roosevelt’s Four Freedoms (1941)—freedom of speech, freedom of worship, freedom from want, and freedom from fear— For Freedoms uses art to encourage and deepen public explorations of freedom in the 21st century.