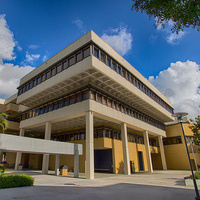 Climate change including rising sea levels around the globe is already impacting both short- and long-range planning in coastal environments.  In this presentation, FIU Professor Michael Sukop addresses two topics of interest to professionals engaged in adaptation to climate change, namely groundwater modeling and nonstationarity.

Southeast Florida is a densely populated low-elevation coastal area that relies on the surficial, sole-source, and prolific Biscayne Aquifer for water supply to 6.2 million residents. The rising sea level is causing water tables to rise leading to numerous groundwater-related challenges including saltwater intrusion, failing septic tanks, sunny-day flooding, and recharge rejection during storms. There is potential for catastrophic hurricane-related storm surge flooding and overtopping of the aquifer. Following the tragic Champlain South Tower collapse in Surfside that led to nearly 100 deaths, there was speculation that corrosion induced by the 1980s-era building’s proximity to the coastline (on the order of 100 meters) and rising sea level might have played a role. Groundwater modeling (and tight model coupling with surface water) plays a crucial role in assessing these issues and projecting future conditions. We have leveraged Miami-Dade County’s multimillion-dollar de facto Model of Record, which was developed by the USGS and published in 2016, to address many of these issues. Discharges from more than 100,000 septic systems that are suspected of contributing significantly to water quality degradation and fish kills in Biscayne Bay have been traced using pathline analysis and are in use by the county to prioritize septic-to-sewer conversion. The potential impacts of a proposed $4.5 billion surge barrier wall on the groundwater system have been investigated by the U.S. Corps of Engineers. Finally, changes in saltwater beneath the collapsed building and its implications for foundation degradation are being evaluated. It is anticipated that a great deal of additional modeling will be needed in the coming decades.