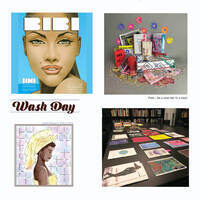 Comics, Zines, and Self-Publishing in the Digital Age

As the digital world takes on a more active presence in our lives, many artists are turning to zines, artist books, and small publications as an alternative way to express themselves and connect beyond the screen.

In celebration of our new exhibition, Will Eisner: Comic Illustrator and Innovator, the Jewish Museum of Florida-FIU presents a panel discussion featuring local Miami artists, writers, publishers, and museum professionals.

Join Bibi Andrade, Philip Lique, Jamila Rowser, and Zoe Welch in conversation about comics and independent publishing in Miami, zines as a tool for education, and the return to these tangible formats in the current moment.

This program is presented in partnership with EXILE Books, the Jewish Museum of Florida-FIU and the Wolfsonian-FIU.

For over 20 years, Brigitte “Bibi” Andrade has documented her adventures around Miami Beach, and around the world, in a series of comic books called The Adventures of Bibi and Friends. The Miami Beach comic book is distributed around the globe in partnership with The Greater Miami Convention & Visitor’s Bureau. Brigitte produced the Centennial Comic Book for the City of Miami Beach in 2015 and is now celebrating the comic books 21st Anniversary in 2020.

Jamila Rowser is a Miami-based, award-winning writer and publisher who enjoys creating comics for Black and Brown women. She's most known for her debut comic Wash Day (illustrated by Robyn Smith) and her indie publishing company Black Josei Press.

Philip Lique a multidisciplinary artist working across print, sculpture, design and installation practices. Lique has worked as a professor, fabricator, and exhibition designer. He often works closely with EXILE Books, to realize collaborative projects, pop ups, and events as well as design printed matter for artists and arts spaces such as Locust Projects, the Center for Subtropical Affairs and Bass Fisher Invitational.

Zoe Welch is a cultural worker, an educator, and an artist. She is the education manager at The Wolfsonian where she leads Zines for Progress and has so far worked with just over 1,000 senior high students in 38 schools to produce 355 zines. For close to two decades, Zoe has been making zines and books—and though she doesn’t know for sure what the difference is, she knows there is one.