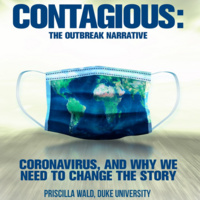 Contagious: The Outbreak Narrative, Coronavirus, and Why We Need to Change the Story

The Center for the Humanities in an Urban Environment is pleased to announce our first Public Zoom Lecture: "Contagious: The Outbreak Narrative, Coronavirus, and Why We Need to Change the Story."

On Tuesday, April 7, we will host Priscilla Wald, Duke professor and author of Contagious: Cultures, Carriers, and the Outbreak Narrative, via Zoom at 1 p.m. EST. Join the webinar at https://fiu.zoom.us/j/349838644.

Covid19 is the name of a pathogen — a disease-causing microbe — but if it is a "newly emerging infection," it is also a newly emerging, though familiar, story: the latest version of “the outbreak narrative.” Accounts of newly surfacing diseases appeared in scientific publications and the mainstream media in the Global North with increasing frequency following the introduction of the human immunodeficiency virus (HIV) in the mid-1980s.  They put the vocabulary of disease outbreaks into circulation, and they introduced the concept of "emerging infections."  The repetition of particular phrases, images and storylines produced a formula that quickly became conventional as it formed the plot of the popular novels and films in the mid-1990s. These stories have consequences.  As they disseminate information, they affect survival rates and contagion routes.  They promote or mitigate the stigmatizing of individuals, groups, populations, spaces and locales (regional and global), behaviors and lifestyles, and they change economies. They also influence how both scientists and the lay public understand the nature and consequences of infection, how we imagine the threat and why we react so fearfully, and which problems merit our attention and resources.

Please send out the recording/presentation slides!

Really important presentation! I would love to have my students in Health & Healing in Hispanic Literature at the U. of New Mexico watch the presentation. Will the recording be posted?