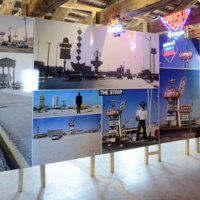 A solo exhibition of photographs from Denise Scott Brown marking the architect, planner and theorist’s first solo exhibition in U.K. The exhibition features photos taken between 1956 and 1966 that illustrate Scott Brown’s explorations into urbanism, Pop Art, and the emerging architectural language of roadside America, ideas which would later be collected in Learning from Las Vegas published in 1972. “Such a study will help to define a new type of urban from emerging in American and Europe, radically different from that we have known; one that we have been ill-equipped to deal with and that , from ignorance, we define today as urban sprawl,” Scott Brown wrote in 1977.

The photos provide insight into how Scott Brown, Venturi Izenour, and their students dissected commercial strips. Never before had such mundane elements bee looked at through an architectural lens: a nondescript shot of a Dodge Charger driving down an L.A. freeway is deliciously titled Industrial Romanticism.