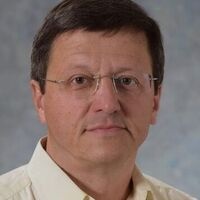 Efficient ultra-wideband nano-antennas are becoming key components for novel photonic applications, such as energy harvesting and optical sensing of particles, fluid refractive index, chemical and biological agents, etc.  Downscaling the well-known configurations of metallic antennas from radio to the optical and infra-red (IR) frequencies offers unique advantages for many of these applications. Furthermore, metallic nano-antennas can be loaded with carbon nano-devices to provide specific functionality. Two types of ultra-wideband highly efficient nano-antenna arrays developed by our group will be described. Also, a novel technique for antenna and load impedance measurements using scattering data will be presented. Various applications of nano-antennas will be discussed.

Dr. Boag's interests are in computational electromagnetics, wave scattering, imaging, and design of antennas and optical devices.  He has published over 100 journal articles and presented more than 250 conference papers on electromagnetics and acoustics. Prof. Boag is an Associate Editor for IEEE Transactions on Antennas and Propagation. He is a Fellow of the Electromagnetics Academy.  In 2008, Amir Boag was named a Fellow of the IEEE for his contributions to integral equation based analysis, design, and imaging techniques.