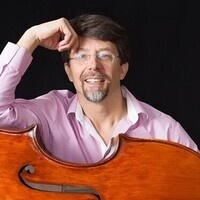 The FIU School of Music will host both a fall and spring residency with double bassist Jeff Bradetich during the 2019-2020 academic year. During his residency at FIU, he will teach master classes, work with the orchestra bass and cello sections, and give individual lessons to music students. On October 3rd, he will join the FIU Symphony Orchestra for an all-Beethoven program at the Wertheim Concert Hall at 7:30 pm.

Proclaimed by the New York Times as "the master of his instrument," Jeff Bradetich is regarded as one of the leading performers and teachers of the double bass in the US today. Since his New York debut in Carnegie Recital Hall in 1982 he has performed more than 600 concerts on five continents including his London debut in Wigmore Hall in 1986. He has won many major solo competitions, recorded six solo albums of music for double bass and piano and has been featured on radio and television throughout North and South America and Europe including CBS, CNN, BBC and NPR.