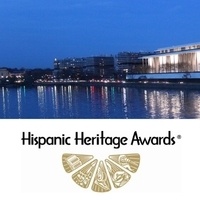 JOHN F. KENNEDY CENTER FOR THE PERFORMING ARTS TO WELCOME BACK THE 31st HISPANIC HERITAGE AWARDS ON SEPTEMBER 12

PBS TO BROADCAST HISTORIC PROGRAM NATIONALLY FOR THE 5TH YEAR

WASHINGTON, DC - The Hispanic Heritage Foundation (HHF) announced today that the 31st Annual Hispanic Heritage Awards will return to the John F. Kennedy Center for the Performing Arts in Washington, DC, on Wednesday, September 12, 2018. The historic program, which was created by the White House in 1987 to commemorate establishment of Hispanic Heritage Month in America, will also be broadcast nationally on PBS stations. The Awards are among the highest honors by Latinos for Latinos, and are supported by 40 national Hispanic-serving institutions.

“The Hispanic Heritage Foundation is thrilled to be back at the Kennedy Center and on PBS to collectively celebrate and share the great promise, accomplishments, and cultural pride of the Latino community through the 2018 Awardees and the powerful performances on the venerable stage,” said Jose Antonio Tijerino, President and CEO of the Hispanic Heritage Foundation. “More than ever, it’s important to shine the spotlight on the tremendous value Latinos provide this great country we all share.”

The 2018 #HHAwards Honorees will be announced over the coming months followed by the performers, hosts and presenters. Visit this page for updates and check out our YouTube Sizzle Reel.

“We are delighted to welcome the return of the Hispanic Heritage Awards to the Kennedy Center,” commented Deborah F. Rutter, Kennedy Center President. “Central to the Center’s mission is our belief that the artists and programming we bring to our stages must reflect the rich cultural diversity of both America and the world. We wish the Hispanic Heritage Foundation much success with this year’s awards program.”

“We are pleased to join the Hispanic Heritage Foundation and the Kennedy Center for Performing Arts in honoring the significant contributions of Latino Americans to our country,”added Paula Kerger, President & CEO, PBS.“We look forward to celebrating the 2018 Hispanic Heritage Awardees during the 5th broadcast on PBS this fall.”

*  The Center and its affiliates stage more than 400 free performances by artists from throughout the world each year on the Center’s main stages, and every day of the year at 6 p.m. on its Millennium Stages, which are also streamed live, online. The Center also offers reduced and complimentary tickets to young people, active members of the military, and the underserved through its MyTix program and offers a Specially Priced Tickets program for students, seniors, persons with disabilities, and others with fixed low incomes. To learn more about the Kennedy Center, please visit www.kennedy-center.org.