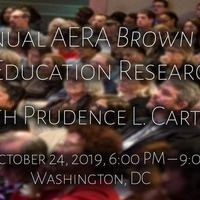 Washington, DC, June 21, 2019 – Prudence L. Carter, dean and professor of the Graduate School of Education at the University of California, Berkeley, and national expert on inequality in education, has been selected by the American Educational Research Association (AERA) to present the 2019 BrownLecture in Education Research. This public lecture will take place on October 24 at the Ronald Reagan Building and International Trade Center in Washington, D.C.

Carter’s research focuses on factors that shape and reduce economic, social, and cultural inequalities among social groups in schools and society. A sociologist, she examines academic and mobility differences influenced by the dynamics of race, ethnicity, poverty, class, and gender in the U.S. and global society. She is an AERA Fellow and an elected member of the National Academy of Education.

“Dr. Carter has contributed tremendously toward advancing our understanding of youth identity and race, urban poverty, and opportunity gaps in education,” said AERA Executive Director Felice J. Levine. “She is a renowned scholar whose work supports the intent of the Brown Lecture as an annual reminder of the important role of research in advancing understanding of equality and equity in education for all communities.”

Carter is the author of the award-winning book Keepin’ It Real: School Success Beyond Black and White (2005) and of Stubborn Roots: Race, Culture, and Inequality in U.S. and South African Schools (2012); and co-editor of Closing the Opportunity Gap: What America Must Do to Give Every Child an Even Chance (2013; all the books were published by Oxford University Press). She has also published numerous journal articles, book chapters, and essays.

The Brown Lecture, now in its 16th year, was inaugurated by AERA in 2004 to commemorate the 50th anniversary of the Brown v. Board of Education decision, in which the U.S. Supreme Court took scientific research into account in issuing its landmark ruling.