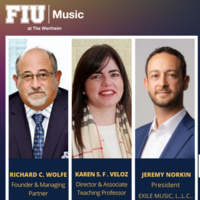 THE MIAMI FINANCE FORUM in a partnership with FIU SCHOOL OF MUSIC would like to invite you to a candid discussion and talk on how the music industry has evolved in recent times from selling CDs to streaming services. Learn more from experts in the industry about how the pandemic has pushed artist and music labels to reorient their business priorities and to think of alternative ways to generate revenue as well as what the future will hold for the industry.

For the past five years, he has been listed as a Super Lawyer™ and as an outstanding lawyer by the South Florida Legal Guide in the areas of Entertainment Law, Probate, and Business Litigation.

Jeremy started his career at William Morris and also worked at RLM Management in Madrid before opening his own agency, Norkin Talent Agency, prior to UTA.

Karen S. F. Veloz, Director and Associate Teaching Professor at the Florida International University School of Music. is an accomplished educator, concert producer, arts administrator and artist manager. At the FIU School of Music, she has served as coordinator of the Music Business Program and as the undergraduate program coordinator in the School of Music. She served a pivotal role in her position as the Associate Dean of Advancement for the FIU’s College of Communication, Architecture + The Arts. She has also worked for Pace Theatrical Group/National Broadway Touring Circuit and the Broward Center for the Performing Arts producing touring shows and educational outreach productions. She has achieved academic recognition for her scholarly contributions at national and international conferences.