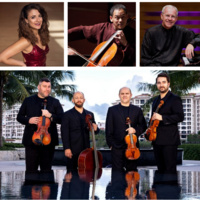 You’re invited to take a musical dive into the world of Johannes Brahms!

You can hear the timelessness of Brahms’s compositions on November 4 at The Wertheim Performing Arts Center at FIU and again on November 5 at the New World Center, with each night offering a different listening experience.

Thank you to WLRN and OceanBank for their generous sponsorship of the FIU Music Festival.

Praised for their “intelligence” and “immensely satisfying” playing by the New York Times, the Amernet String Quartet has garnered recognition as one of today’s exceptional string quartets and are Ensemble-in-Residence at Florida International University in Miami. Their sound has been called “complex” but with an “old world flavor.” Strad Magazine described the Amernet as “…a group of exceptional technical ability.”The Amernet’s performance schedule has taken the quartet across the Americas and to Asia, Europe, and the Middle East. They have collaborated with many of today’s most prominent artists and ensembles including the Tokyo and Ying quartets as well as Shmuel Ashkenasi, Robert deMaine, Roberto Diaz, Gary Hoffman, Ida Kavafian, Anthony McGill, Sherrill Milnes, Michael Tree.Internationally, the quartet has appeared at major festivals around the world, including Cervantino, San Miguel de Allende, Aviv (Israel), and Colima (Mexico), while in Germany a critic commented that their playing was “fascinating, with flawless intonation, extraordinary beauty of sound, virtuosic brilliance and homogeneity of ensemble...

is the violist of the Dover Quartet, the Penelope P. Watkins Ensemble in Residence at the Curtis Institute of Music. Pajaro-van de Stadt has appeared as a soloist with the Tokyo Philharmonic Orchestra, the Jacksonville Symphony, and the Sphinx Chamber Orchestra; and has performed in recitals and chamber music concerts throughout the United States, Latin America, and Europe, including an acclaimed 2011 debut recital at London’s Wigmore Hall.

A violin student of Sergiu Schwartz and Melissa Pierson-Barrett for several years, she began studying viola with Michael Klotz at the Bowdoin International Music Festival in 2005. Pajaro-van de Stadt graduated from the Curtis Institute of Music, where she studied with Roberto Díaz, Michael Tree, Misha Amory, and Joseph de Pasquale. She received a master’s degree in string quartet performance from Rice University’s Shepherd School of Music, where she studied with James Dunham as a member of the Dover Quartet.

Pajaro-van de Stadt joined the faculty of the Curtis Institute of Music in 2020. She also teaches at Northwestern University’s Bienen School of Music.

Anton Nel, winner of the 1987 Naumburg International Piano Competition at Carnegie Hall continues to tour internationally as concerto soloist, recitalist, chamber musician and teacher. The South-African born Mr. Nel was a student of Adolph Hallis at the University of the Witwatersrand, and pursued graduate studies at the University of Cincinnati, where he worked with Bela Siki and Frank Weinstock. He currently holds the Joe R. and Teresa Lozano Long Endowed Chair in Piano at the University of Texas at Austin, and is the Head of the Division of Keyboard Studies. He is also a Visiting Professor at the Manhattan School of Music and is on the artist-faculties of the Aspen Music Festival and the Steans Institute at the Ravinia Festival during the summers. Anton Nel is also an avid harpsichordist and fortepianist and has been a regular performer at Seattle Chamber Music Society for the past 30 years.

Cellist Bion Tsang has been internationally recognized as one of the outstanding instrumentalists of his generation: among his many honors are an Avery Fisher Career Grant, an MEF Career Grant and the Bronze Medal in the IX International Tchaikovsky Competition. Mr. Tsang earned a Grammy nomination for his performance on the PBS special A Company of Voices: Conspirare in Concert (Harmonia Mundi).