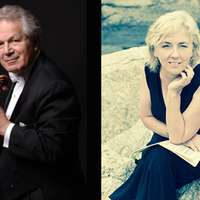 In celebration of the 250th anniversary of the birth of Ludwig van Beethoven, acclaimed violinist and Artist in Residence Robert Davidovici will be joined by USC’s concert pianist Bernadene Blaha for a two-part concert exploration of selected Beethoven Sonatas for Piano and Violin, beginning with the first five for this performance. The second installment will take place on January 30, 2020.

Born in Transylvania, Romania, Robert Davidovici began his studies with a student of the legendary David Oistrakh, subsequently studying with Ivan Galamian at The Juilliard School, where, upon graduating, he served as a teaching assistant to the famed Juilliard String Quartet. He is the recipient of several distinguished First Prize honors, among them the Naumburg International Violin Competition and the Carnegie Hall International American Music Violin Competition.

As an avid chamber musician, Robert Davidovici has collaborated with numerous esteemed colleagues, among them Emanuel Ax, Yefim Bronfman, Lynn Harrell, Cho Liang-Lin, Yo-Yo Ma and Isaac Stern. Carnegie Hall has featured him as part of its “American Music Masters” series, and he was the subject of a television special on Boston’s WGBH.

Bernadene Blaha’s command of the piano, whether featured as recitalist, concerto soloist or chamber musician, has been heralded in performances throughout North America, Europe, Australia, Asia and Mexico. Piano and Keyboard magazine reviewed her as “a pianist of integrity, with lovely sonorities and total clarity of line.” Highlights include return engagements at the Piatigorsky International Cello Festival, Newport Music Festival, Los Angeles Philharmonic Chamber Music Series, Worcester Chamber Music Society as well as performances throughout the United States, Canada, France, and Italy.

Currently residing in Los Angeles, Ms. Blaha has been a member of the Keyboard Faculty at the Thornton School of Music, University of Southern California since 1993 where she is an Associate Professor.