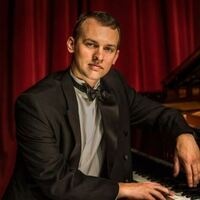 “[He] coaxed the listener into the music’s poetry from the very first notes…though his technique emerged through the program as one which is capable of anything, it was always used in the service of the music itself.” -New York Concert Review

American pianist Joseph Kingma enjoys an active and prolific career as a soloist, chamber musician, and teacher. In his New York solo debut at the Yamaha Artist Salon, the New York Concert Review wrote that he: “coaxed the listener into the music’s poetry from the very first notes…though his technique emerged through the program as one which is capable of anything, it was always used in the service of the music itself.” He won first prize in the American Liszt Society’s 2017 Franz Liszt International Piano Competition, and has won awards several other international contests. As a recitalist, he has performed on the Dame Myra Hess Concert Series in Chicago, the Yamaha Artist Services Performance Series in New York City, the Dorothy MacKenzie Price Piano Series in Toledo, the Music Institute of Chicago, the Timucua Arts Foundation in Orlando, the Good Shepherd International Concert Series in Minneapolis, L’Oasis Musicale in Montreal, and many others. Several of his performances have been featured on Chicago’s classical music radio station, 98.7 WFMT. A frequent concerto soloist, he has been engaged with the Rapides Symphony, Monroe Symphony, Manassas Symphony, Gulf Coast Symphony, Chamber Orchestra of Sarasota, Palm Beach Atlantic Symphony, Spring Hill Orchestra, and Brazos Chamber Orchestra. He has earned repeat performances with the Palm Beach Chamber Music Festival and the Sonus International Music Festival, including an invitation to adjudicate the latter’s Carlos Guastavino International Composition Competition.

Joseph, an MTNA Nationally Certified Teacher of Music, is the Coordinator of the Keyboard Division and Assistant Professor of Piano at Palm Beach Atlantic University, where he teaches piano and related courses. His college and private studio students have won awards in competitions and been accepted into prestigious graduate school performance programs. He regularly receives performance and masterclass invitations from music schools, universities, and music teacher associations across the country.

Joseph graduated from the University of Texas at Austin with his DMA, where he studied with Anton Nel. He earned his BM and MM at Rice University under the tutelage of Robert Roux. He has participated in masterclasses and coachings with Norman Krieger, Tali Morgulis, Sandra Wright Shen, Alan Chow, Craig Nies, and Jon Kimura Parker. His earlier teachers include Aviram Reichert, Philip Pletcher, and Elena Arseniev. Joseph’s website is www.josephkingma.com.