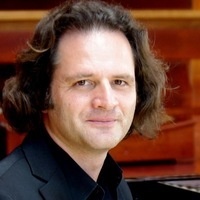 The FIU School of Music is excited to welcome returning concert pianist Grigorios Zamparas for a performance featuring works by Chopin and Russian composer César Cui.

He is a frequent guest at numerous festivals worldwide, having performed several times at the prestigious Newport Music Festival (Newport, RI), the Mainly Mozart Festival (Miami, FL), The Artist Series of Sarasota and The Salon of the Arts (Sofia, Bulgaria), among others. He has been featured as a soloist in more than thirty different piano concertos with orchestras such as the Porto Alegre Symphony Orchestra (Brazil), Indiana University Symphony Orchestra, Boston Neo-Politan Chamber Orchestra, Tampa Bay Symphony, Togliati Philharmonic (Russia), the Sofia Soloists (Bulgaria) and the Bohuslav Martinu Philharmonic of the Czech Republic, to name a few.

He is an Associate Professor of Music and head of the piano program at The University of Tampa, in Tampa, FL. At The University of Tampa he was the recipient of the Outstanding Scholarship or Creative Work Award for the 2010-2011 academic year. Zamparas began studying music at the age of seven in Greece, where he received his first piano degree from the Lamia Conservatory in 1995, studying with the distinguished Greek pedagogue Yorgos Manessis. He holds a DMA degree from the University of Miami where he studied with pianist Ivan Davis, and degrees from Indiana University (MM), University of Indianapolis (BM), and the Aristotle University of Thessalonica, Greece. He has recorded six albums for Centaur Records, including the complete piano concertos of Anton Rubinstein. Grigorios Zamparas is a Yamaha Artist.