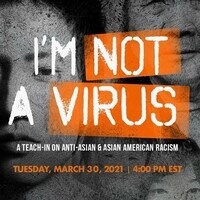 I'm Not a Virus: A Teach-In on Anti-Asian & Asian American Racism

On Tuesday, March 30, at 4 p.m. EST, FIU’s Center for the Humanities in an Urban Environment and the Asian Studies Program - with the support of the Division of Diversity, Equity, and Inclusion - will host “I’m Not a Virus: A Teach-In on Anti-Asian / Asian American Racism.” We’ll learn from actor and comedian Margaret Cho and a full panel of activists, scholars and artists about the problem of anti-Asian racism, its history, and what we should do about it.

The anti-Asian racism emerging around the pandemic is unfortunately just the latest iteration of a much deeper problem. We have to talk about it. We have to listen. And we have to learn.

"No Minority is a #model"
Margaret Cho, actor, comedian, advocate
Actor, stand-up comic and lifelong advocate Margaret Cho shares her experiences with racism on stage and off, and explains why “model minority” stereotypes are so damaging.

"Queering Asian American Violence"
Sean Metzger, University of California, Los Angeles
Drawing on his experience in both social services and higher education, Metzger will discuss the ways in which race, gender, and sexuality intersect in acts of hate. He discusses structural forms of violence that oppress Asian American communities, in particular, and offers critiques of responses that might reinforce the very problems they seek to remedy.

"Nappy Routes & Tangled Tales: A Personal Reflection on Anti-Asian Violence and White Supremacy"
Mitzi Carter, Florida International University
Reflecting on her Black father’s experiences of being racialized in the US South and her mother’s experiences of being Orientalized in militarized landscapes, Carter will trace a few routes of White supremacy and how it has the power to intimately and painfully reverberate across generations.

"AAPI Racism and Freedom"
Mia White, New School
This talk will outline a critical definition of race and will explore the geographic roots of anti-Asian racism, with an introduction of a Freedom Framework based in cross-racial solidarity for a shared future.

"South Asian and Asian Americans"
Cyra Choudhury, Florida International University
Prof. Choudhury will examine how South Asian experiences converge and diverge with those of other AAPI groups by first examining the framing of "Asianness" in the United States and then discussing how South Asians have become part of the broader group experiencing similar exclusions even while having distinct histories.

"Yellow Peril Today”
Jack Tchen, Rutgers University
Professor Tchen traces a critical history of anti-Asian racism in the United States from its roots in colonialism to its inflections today.

This event is co-sponsored by: