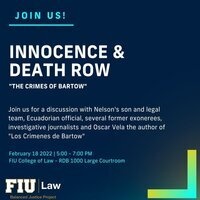 Innocence and Death Row: The Crimes of Bartow

A global discussion on the injustices in the criminal justice system, with a focus on Florida's Prosecution of Nelson Serrano.

The Balanced Justice Project at FIU College of Law welcomes you to:

"Innocence and Death Row: The Crimes of Bartow"

A global discussion on the injustices of the criminal justice system with a focus on the story of Nelson Serrano who:

- Is an Ecuadorian national kidnapped in his home city of Quito and illegally deported to Florida (as per Inter-American Court decision);

- Served 15 years on death row despite assurances from the US to Ecuador that he would not face the death penalty;

- Is excluded by DNA evidence;

- Had a trial that relied upon flawed forensic evidence;

- Discovered evidence that had been suppressed;

Join us for a discussion with Nelson's son and legal team, Ecuador, several former exonerees, investigative journalists and the author of "Los Crimenes de Bartow."