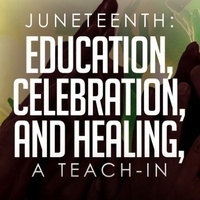 “Juneteenth: Education, Celebration, and Healing: A Teach-In” is a virtual, public-facing program designed to engage the widest possible audience on topics related to the history of Juneteenth, the ways it is experienced and celebrated by African Americans today, and the myriad social justice issues that cohere around it. The program brings together 5 public figures, scholars, activists, and artists, who together shed needed light on the past and inspire a hopeful vision for the future. Each guest will speak for a maximum of 8 minutes, keeping the pace of the program lively and accessible to a general audience. By approaching Juneteenth from various artistic and disciplinary perspectives, we hope to engender conversation even among those who know Juneteenth inside and out, while educating those who don’t on the fundamentals. We use the word “teach-in” deliberately, a nod to the sit-ins of the Civil Rights Era, as a way to point to the unique combination of advocacy and education that the program puts forth. The program includes:

Artist and author Nikkolas Smith, a 2016 White House Innovator of Color Fellow, is a visual artist known for his Hollywood movie posters (Black Panther) and art that inspires. His works have appeared in The New York Times, The Washington Post, The Academy of Motion Pictures, CNN, and more. In “Juneteenth” Smith will present “American Holiday: The Artivism of Juneteenth.”

Jonathan Knight is a filmmaker who recently become aware of his own family's relationship with Slavery in the US South. His current film interrogates his family history and the parallel history of the people his ancestors enslaved. In “Invented Before You Were Born: A White Exploration of Race, Family, Responsibility, and Reconciliation,” Knight shares scenes from the film and examines his role in White Supremacy the process of unwinding it.

Historian Breena Greer is an Associate Professor at Wellesley College and past Woodrow Wilson and ACLS Fellow. Her research focuses on African American business and visual culture. In “Juneteenth as History and Holiday,”Greer thinks through the precariousness of Black freedom, and Juneteenth as Black America’s July 4th.

Trevon Logan is the Hazel C. Houngberg Distinguished Professor of Economics at The Ohio State University and a Research Associate at the National Bureau of Economic Research. He specializes in economic history, economic demography, and applied microeconomics. In “Reparations and the Limits of Reparations,”Logan guides viewers through the economics and justice issues around reparations.

Mark Anthony Neal is the James B. Duke Distinguished Professor of African & African American Studies and Chair of the Department of African & African American Studies at Duke University where he offers courses on Black Masculinity, Popular Culture, and Digital Humanities. In “The Humor of Juneteenth” Neal explores pop cultural representations of Juneteenth, including the critically acclaimed Juneteenth episode of the hit sitcom Blackish.

Produced jointly by FIU’s Center for the Humanities in an Urban Environment, Division of Diversity, Equity, and Inclusion, and Program in African/African Diaspora Studies with the support of FIU Engagement, Center for Advancement for Teaching, Wells Fargo, and the Kramer Memorial Fund.