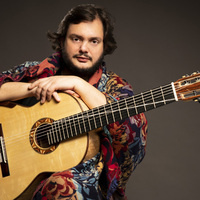 The 2021 Miami International GuitART Festival presents virtuoso 7-string guitar player Yamandu Costa in a solo concert. Praised by the La Presse Montreal as “Musicians of this caliber that make you fall out of your seat come once in a generation”, Yamandu has left audiences breathless around the world with his impressive skill and overwhelming passion.