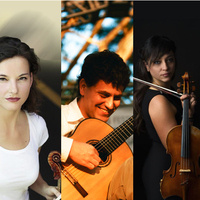 It is not surprising that both of these composers have written major works for this specific instrumentation. However, perhaps by coincidence, the pieces they wrote turned out to have something else in common: the fact that they evolve around ethnic themes that, together, suggest an idea of migrations.

Born to a family of middle-eastern immigrants in a small town of southeastern Brazil, in his early teens Sergio Assad moved to Rio de Janeiro. There, like many other people from all over the country, his family went to search for better opportunities of education and work. In the center of Rio, there is an old train station called Central do Brasil. This is a place where people from many different Brazilian cultures meet. As such it became the inspiration for the large one-movement work that was titled after it. In this piece one hears a large variety of Brazilian rhythms, from the southern Chamame to the northeastern Baião, Frevo and Bumba meu Boi.