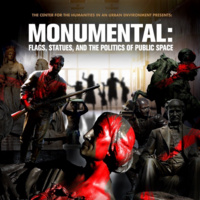 Monumental: Flags, Statues, and the Politics of Public Space

The Center for Humanities in an Urban Environment is pleased to present “Monumental: Flags, Statues, and the Politics of Public Space” on Tuesday, August 18, at 4 p.m. Eastern/1 p.m. Pacific.

In “Monumental,” scholars, photographers, activists and museum curators come together to challenge viewers to think critically about public space and to inspire new ways forward. The conversation considers Confederate and colonial names, flags, monuments and statues in the United States, as well as similar symbols in Brazil, the United Kingdom and across the Caribbean.

Free and open to the public in any time zone.

Join us on Zoom

Hi, Will the recording be available?