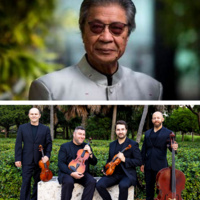 FIU's ensemble in residence the acclaimed Amernet String Quartet and the FIU NODUS Ensemble perform the works of Grawemeyer award-winning composer Dr. Chinary Ung. Dr. Ung will be joining via Zoom for the pre-concert talk.

SPONSORS
This festival discussions and concerts are free to the public thanks to the generosity of our sponsors: Miami-Dade County Department of Cultural Affairs and the Cultural Affairs Council, Miami-Dade County Mayor and Board of County Commissioners, the City of Miami Beach, FIU School of Music, FIU Miami Beach Urban Studios, the Kimberly Green Latin American and Caribbean Center at FIU, The Wolfsonian – FIU, and The Betsy Hotel.


NEW MUSIC MIAMI ISCM FESTIVAL
The festival has championed and presented cutting-edge contemporary classical music over its 25 years of existence including music for soloists, chamber ensembles, and music with video and electronics. Serving as a platform for a wide variety of composers and performers from all over the world representing numerous cultures, ethnicities and backgrounds, it has established itself as an important annual cultural event in South Florida.

What does ISCM stand for?
ISCM stands for International Society for Contemporary Music. It is a prestigious international network of members from around fifty countries, devoted to the promotion and presentation of contemporary music - the music of our time. Through ISCM, our members promote contemporary music in all its varied forms, strengthening musical life in their local contexts and making their music and its creators known to world. The ISCM embraces the diverse music of its many members without discrimination on the basis of race, gender, religion, or politics.