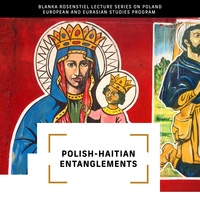 Join the Green School for an exploration of the transnational connections between Poland and the Global South, Haiti in particular. The historical background that underpins this investigation begins with Napoleon Bonaparte in 1802. From 1802 to 1805, Napoleon dispatched about 5000 Polish legionaries to Saint-Domingue, modern-day Haiti, as part of his massive effort to contain the slave rebellion that had arisen in 1791. However, a group of Polish soldiers opposed Napoleon’s efforts to subjugate the rebels. Consequently, these soldiers unwittingly took part in the creation of the world’s first black-led republic and first independent Caribbean state when it cast off French colonial control and slavery in the early 19th century.

Edouard Duval Carrié is a contemporary artist and curator based in Miami, Florida. Born and raised in Haiti, Duval Carrié fled the regime of “Papa Doc” Duvalier as a teenager and subsequently resided in locales as diverse as Puerto Rico, New York, Montreal, Paris and Miami. Parallels thus emerge between the artist’s cosmopolitan lifestyle and his artistic sensitivity toward the multifaceted identities that form his native Haiti, including the dense iconography derived from Caribbean history, politics and religion.

Dr. Jacek J. Kolasiński, Founding Director of the Ratcliffe Incubator of Art + Design in the FIU College of Communication, Architecture + The Arts; Associate Professor of Art in the Department Art + Art History, where he served as the department chair for six years. A visual artist and curator, Dr. Kolasiński came to the U.S. from Poland, where he studied history and philosophy at the Jagiellonian University in Kraków. His ongoing Creole Archive Project explores transnational connections between Poland and the Global South.