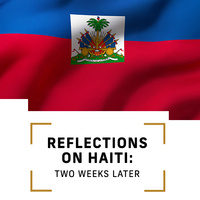 PRESENTED BY THE HAITIAN STUDIES ASSOCIATION

The international press exploded with coverage of the assassination of Haiti's president Jovenel Moïse, who was executed in the early hours of Wednesday, July 7, 2021. That same day, several large non-Haitian institutions opined about what Haiti needs. Some called for a new military occupation despite multiple flawed and failed past interventions in Haiti, while others angled to have a role in decision-making and the electoral calendar. The press reported the speeches of one individual who claimed power shortly after the assassination, but that authority was contested shortly thereafter. Where do things stand two weeks later? What are today’s movements in Haiti demanding? What are their models for Haiti?

This panel provides Haitian activists and civil society representatives with a platform to share their analyses of recent events, provide additional context through their lived experiences and put forth proposals for the future of Haiti. Speakers' nuanced perspectives will continue to layer the conversation and help inform media professionals, scholars, students, members of solidarity organizations, civil society, the Diaspora and the general public—anyone interested in Haitian organizations’ voices is welcome.

Velina Elysée Charlier
Nou Pap Dòmi (We Will Not Sleep)

Event will be in Haitian Creole with simultaneous interpretation to English.
Part of the LACC FLAC Lecture Series and LACC's Haitian Studies Program of Excellence.

Institute for Justice and Democracy in Haiti