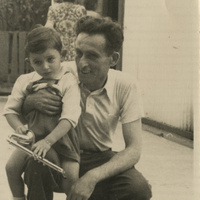 Sing This at My Funeral: A Memoir of Fathers and Sons

Join us for a book presentation featuring David Slucki as he discusses the memoir he wrote about his grandfather, Jakub Slucki. A Holocaust survivor whose first wife and two sons had been murdered at the Nazi death camp in Chelmno, Poland, Jakub lived a turbulent life before he passed away peacefully in his sleep at the age of 77 in 1978. Just over 37 years later his son Charles died of a heart attack.

David Slucki’s Sing This at My Funeral: A Memoir of Fathers and Sons tells the story of his father, his grandfather and the grave legacy that they each passed on to him. This is a story about the Holocaust and its aftermath, about absence and the scars that never heal and about fathers and sons and what it means to raise young men.

David Slucki is an author and historian based in Charleston, South Carolina, whose work focuses on Jewish life after the Holocaust. He is currently an assistant professor in Jewish Studies at the College of Charleston, and in January 2020 will join Monash University as the Loti Smorgon Associate Professor in Contemporary Jewish Life and Culture. He writes about Holocaust survivors, Jews and socialism as well as comedy (and occasionally, where they intersect!).