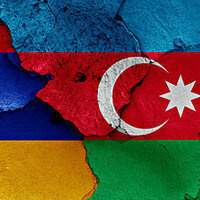 Spiraling Out of Control?: Armenia and Azerbaijan on the Brink

Renewed fighting between Armenia and Azerbaijan in and around the disputed Nagorno-Karabakh region dating to September 27, the worst in many years, has caused hundreds of civilian and military casualties on both sides. While members of the Minsk Group led by the U.S., France, and Russia have called for an end to the violence, other countries, including Turkey and even Iran, have become involved to varying degrees, raising the possibility that the conflict could spiral out of control into a bigger conflagration.

Join us for an expert panel to discuss these latest developments and what they mean not only for Armenia and Azerbaijan but for the wider region.

Ali Bakeer, Political Analyst and Researcher based in Ankara, Turkey