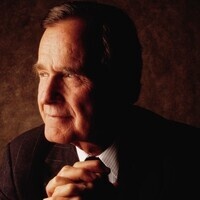 The Legacy of George H.W. Bush - A Conversation with Green School Faculty Experts

The Legacy of George H.W. Bush
From the fall of the Berlin Wall to the first Gulf War,
how will history regard the 41st president of the United States?
A conversation with Green School faculty experts

A one-term president who presided over the end of the Cold War, George H.W. Bush served as a Navy pilot, ambassador to the United Nations, envoy to China, director of the Central Intelligence Agency, U.S. congressman and vice president for eight years before being elected the nation’s 41st president. During his presidency, the nation witnessed the fall of the Berlin Wall, the collapse of the Soviet Union, the first Gulf War and the beginning of the North American Free Trade Agreement. How will history regard the longest living president in American history? FIU faculty experts in U.S politics and foreign policy will tackle that question during a Facebook Live conversation at 10 a.m. on Tuesday, December 4.