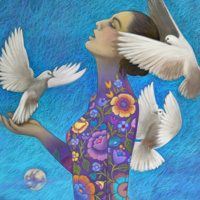 The Ongoing US Immigration Debate: From the Future of DACA and Family Separation to the Status of Asylum Seekers and International Students

Immigration remains a hot button issue in the United States. Despite the June 18th U.S. Supreme Court decision to block the Trump Administration’s attempt to do away with the Deferred Action for Childhood Arrivals program, which has protected approximately 700,000 undocumented youths from deportation, the White House continues its push to dismantle the program and curb immigration more broadly, including those seeking asylum in this country. At the U.S.-Mexico border, the family separation policy continues to devastate lives, now further endangered by the COVID-19 pandemic. And most recently, the administration proposed expelling international students from the country if they had no in-person classes – a decision rescinded, for now. Join the Steven J. Green School of International and Public Affairs for a live webinar on these and other topics that frame the current argument on immigration policy and reform.

Director of the Carlos A. Costa Immigration Human Rights Clinic

Al otro lado is an exhibition at the Patricia & Phillip Frost Art Museum. This phrase is used in Mexico referring to shared borders with the United States and the space populated by many Mexican immigrants on the other side of the Mexico/U.S. border. The U.S. media often oversimplifies the migration, exile, labor, and cultural confluences between Mexico and the U.S. In Miami, immigration, exile, and displacement are common threads that bind many of the city’s citizens. The art produced by Mexican and Mexican American artists in the U.S. has a long history that continues to reverberate. This echo is a dynamic and necessary narrative that expands traditional interpretations of “American art.” Otros Lados: Itzel Alexis Basualdo, Hugo Crosthwaite, and Judithe Hernández brings together three generations of artists who are deeply informed by Mexican and Mexican American experiences al otro lado.

Check in with the museum at frost.fiu.edu for news about the virtual tour and in-person debuts of the exhibition.