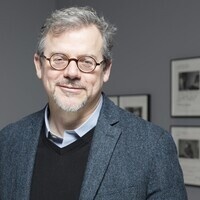 JMOF-FIU curator Jacqueline Goldstein will talk via Zoom with Paul Roth who will discuss Richard Avedon's Chicago 7 series on the December 10th Thursdays at Three.

Paul Roth is Director of the Ryerson Image Centre in Toronto, Ontario. Previously, he served as Senior Curator and Director of Photography and Media Arts at the Corcoran Gallery of Art in Washington, D.C.; Executive Director of The Richard Avedon Foundation in New York; and Acting Chief Curator and Senior Curator during an earlier stint at the Corcoran. Specializing in contemporary and 20th century American photography (particularly documentary work and portraiture) and experimental film, he is widely respected as a leading scholar on the work of photographers Gordon Parks, Richard Avedon, and Robert Frank.

Sponsored by Merle and Daniel Weiss