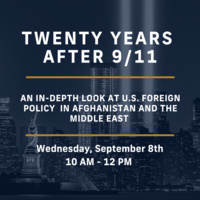 An in-depth look at U.S. Foreign Policy in Afghanistan and the Middle East

A discussion with Peter on his latest book, The Rise and Fall of Osama bin Laden

A moderated session among experts on U.S. foreign policy in Afghanistan and the Middle East.

Virtual event is free & open to the public