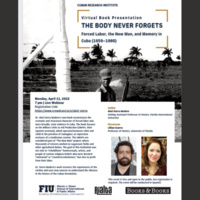 Dr. Abel Sierra Madero's new book reconstructs the systemic and structural character of forced labor and, more broadly, state violence in Cuba. The book focuses on the Military Units to Aid Production (UMAPs, their Spanish acronym), which operated between 1965 and 1968 in the provice of Camagüey, as repressive enclaves of a totalitarian society. The UMAPs are considered part of "The New Man" project, where thousands of citizens worked on sugarcane fields and other agricultural duties. The goal of this institution was not only to "rehabilitate" homosexuals, artists, and people of various religious beliefs who were deemed "antisocial" or "counterrevolutionary," but also to profit from their labor.

Dr. Sierra Madero's work recovers the experiences of the victims and uses new sources to understand the silences in this history of the Cuban Revolution.

This event is free and open to the public, but registration is required and can be found here. This event will be conducted in Spanish.

Sign-on details will be provided at registration.