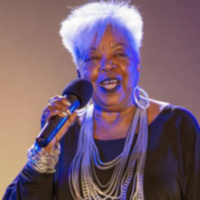 Carole-Ann Taylor is everything to so many Miamians and to changemakers around the country - for so many different reasons and in so many different ways. She is an entrepreneur, civic leader, and professional singer who opened up Little Havana’s first souvenir shop.  She is also the longest-serving board member on the board of Viernes Culturales, one of Miami’s monthly arts festivals. Taylor was born in Connellsville, Pennsylvania, where she started taking music lessons as a child and grew up singing in church choirs, the daughter of a Baptist minister. Her father was a civil rights activist; her mother an active community volunteer. In Miami, then Mayor Maurice Ferré hired Carole-Ann to assist him in community outreach. In 1987, she let her job in public service in order to open up a shop in the newly developed Bayside Marketplace in downtown Miami. Then she opened up Little Havana’s first souvenir shop, and later shops in other sites including Miami International Airport. She also became an active member of the Greater Miami Convention and Visitors Bureau (GMCVB), consistently advocating for cultural heritage tourism that would benefit Miami’s neighborhoods. Carole Ann  maintains her involvement in civic affairs, serving as a board member of the Adrienne Arsht Center for the Performing Arts, Chair of the Multicultural Tourism Committee of the GMCVB (and as a member of its Executive Board), WDNA Jazz Radio and Viernes Culturales. She is also a ‘regular’ in The Betsy’s LIVE Jazz program – and has a huge following of adoring fans!