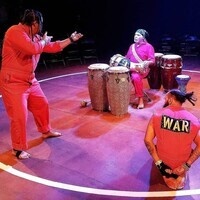 Join the Jewish Museum of Florida-FIU and O, Miami for a storytelling workshop led by Iraq War vet, performance artist, and clinical therapist Anthony Torres. Torres will share how his personal and professional experiences re-ignited his passion for writing and ultimately led to his current role as writer, performer, and Executive Director of Combat Hippies – an all-military veteran theater company based in Miami, Florida.

Anthony Torres is a licensed clinical social worker and combat veteran with over sixteen years of experience in the fields of trauma and mental health recovery. He served three years in the Army Reserve as a Civil Affairs Specialist followed by a four-year enlistment on active duty as a mental health specialist. This included a twelve-month combat tour to Abu Ghraib Prison, Iraq where he provided counseling to deployed troops. Following an honorable discharge, he relocated to South Florida to attend college. He currently works as a readjustment counselor at the Pompano Beach Vet Center. He holds an MS in Psychology from Albizu University and a Master’s degree in Social Work from Barry University. Anthony is also a co-founder and Executive Director of Combat Hippies, an ensemble of Puerto Rican military veteran performing artists based in Miami, Florida.

This program is sponsored by the Greater Miami Jewish Federation Incubator Grant.