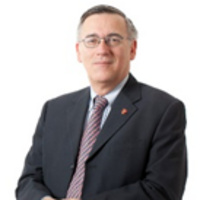 Workshop on Scientific and Technical Publishing by Dr. Ted Stathopoulos

This workshop is based on the presenter's experience as Editor of an international Elsevier journal, the journal of Wind Engineering and Industrial Aerodynamics. The workshop may be very beneficial to post-graduate students, researchers and junior Assistant / Associate Professors, who quite often struggle with their journal publications and make mistakes totally avoidable. Useful hints regarding the publication process will be presented and a question and answer period will follow.

Ted Stathopoulos, Ph.D., P.Eng, F.CAE, F.ASCE, F.SEI, F.ICE, received his Civil Engineering Diploma from the National Technical University of Athens, Greece and both his M.E.Sc. and Ph.D. from the University of Western Ontario. He is currently Professor at the Department of Building, Civil and Environmental Engineering of Concordia University, Montreal, Canada. His research in the area of wind effects on buildings and their codification has been influential in the development of codes and standards around the world. He has an extensive publication record with more than 500 articles in refereed journals and conference proceedings. He is a member of the ASCE 7 Committee on Minimum Wind Loads. He is a professional engineer registered in Québec, Ontario and in Greece; he is a Fellow of the Canadian Academy of Engineering, Fellow of the Institution of Civil Engineers and Fellow of the American Society of Civil Engineers and its Structural Engineering Institute. He is the Editor of the Journal of Wind Engineering and Industrial Aerodynamics.